Of light and shadows and people

All my photos this week were taken in the tiny perimeter around the Popes' Palace, Avignon main tourist attraction, but with a few surprises along the way. 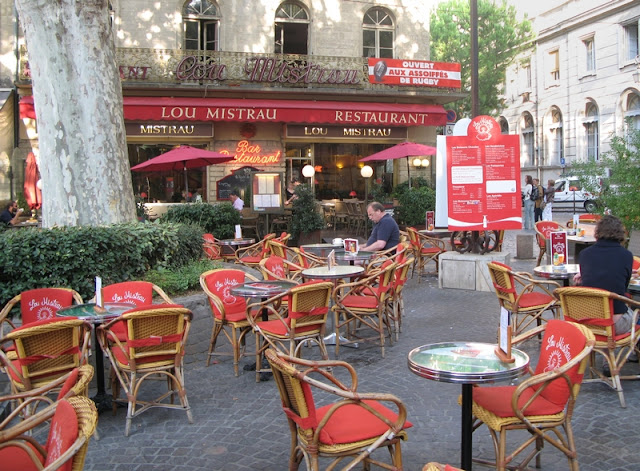 An early morning walk took me first to the Place de l'Horloge (Town Hall square) where the red and white banner hanging on the first floor balcony of this restaurant caught my eye: “Ouvert aux assoiffés de rugby”, Open to the rugby thirsty. That keeps me on the beer track I started last week! I’ve seen this banner outside a number of cafes and bars around town: could this be the official slogan for the places where you can watch the Rugby World Cup matches live on a wide screen? Is this an international slogan? Have you seen a similar one where you live? Is the World Cup followed much in your country? Here you can't see an ad on TV that isn't somehow related to it. The oval ball is everywhere! 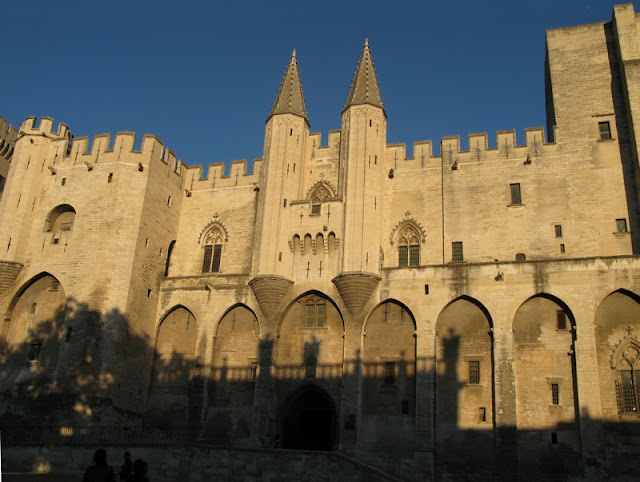 From the Place de l'Horloge it's only a short stroll through a narrow pedestrian street to arrive to the spectacular Popes' Palace, whose façade you can see here. These impressive walls belong to one of the largest medieval Gothic buildings in Europe. Read more about the Popes' Palace here. I had planned to visit it on Sunday afternoon during Heritage weekend, but the large crowds queuing outside prompted me to change my plans. An outside shot will do for today. In the afternoon, the falling sun starts casting the shadow of the Conservatory of Music (located across the square) onto the golden wall - if you looked closely you'd see the details of its rooftop balustrade drawing a dark pattern on the Palace's facade. 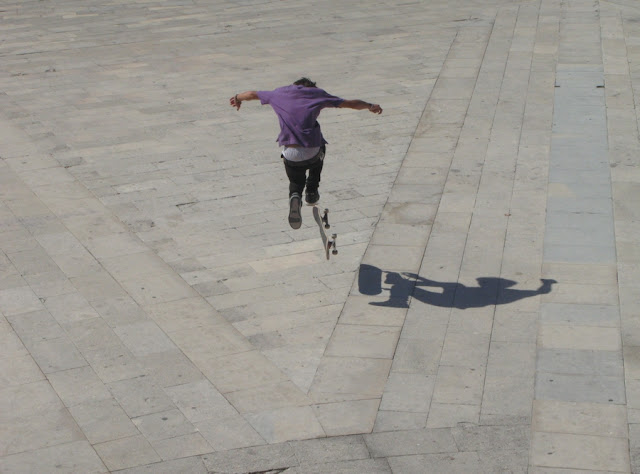 My steps took me to the large marble courtyard outside the castle. Its smooth surface makes it a favourite spot for young skateboarders. I spent a short while there trying to catch an interesting shadow. Not bad, this one! 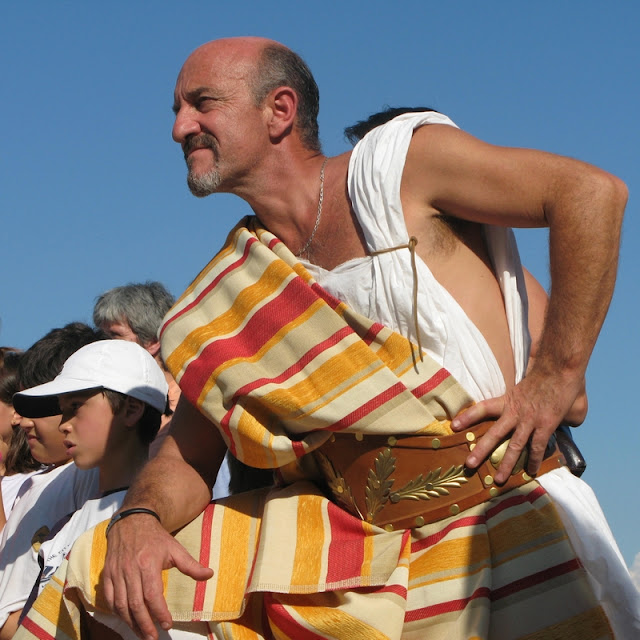 I then headed for the Jardin des Doms, the public gardens next to the Palace, where I saw a re-enactment of Spartacus, the movie. This was one of the numerous free shows offered in Avignon during Heritage weekend. Using the French-dubbed soundtrack of the movie, local actors mimed excerpts of Spartacus’ life as a slave and then as a gladiator, with a focus on spectacular gladiator fights. This actor was Julius Cesar watching the games. As an city photo blogger, I have more experience in photographing buildings than people so I enjoyed taking him as a model and practising my portraituring skills. I like his pose here.

Watching the show I met Daniel, a retired photo reporter from the local newpaper La Provence. We talked about photography of course. There are two things he told me:
1. The best thing you can teach your kids is curiosity - I couldn't agree more.
2. One of the key elements to a good photo is light. Many people forget about it, concentrating exclusively on the framing. I hope this week's photographic essay of mine does justice to his teachings... 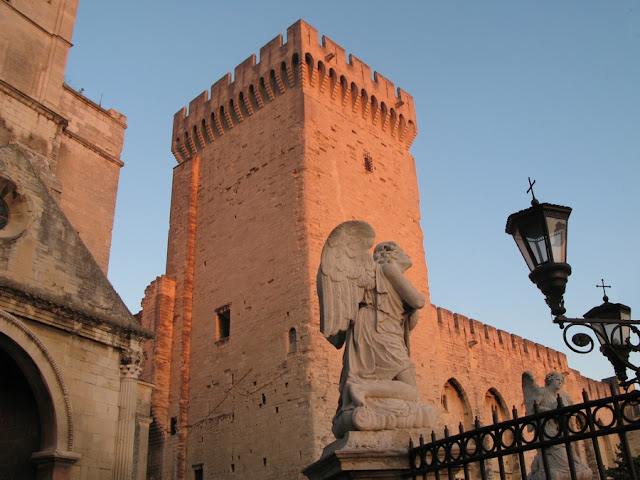 Later on in the afternoon when I walked back the light was turning to golden red. In front of Notre-Dame des Doms cathedral a praying angel was already greying at dusk while the large dungeon at the back was catching the last pink rays of the sun. 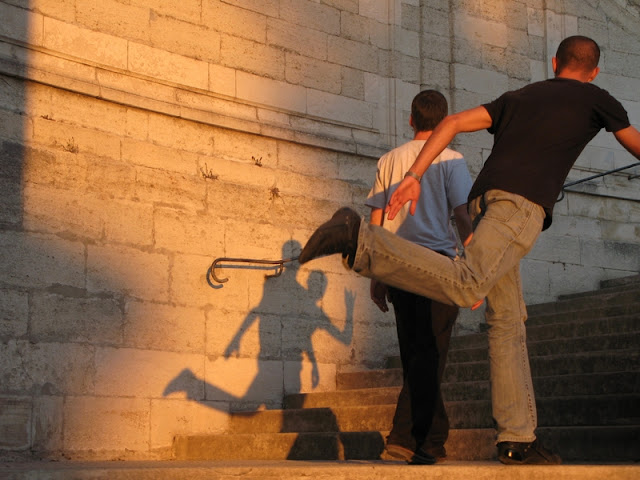 And the end of the day treated me to the icing on the cake, a real fun shot. When he saw me in ambush at the bottom of the stairs waiting for passer-bys to cast interesting shadows on the wall, this young guy volunteered a great move. I only took one photo, and it turned out great. Thanks mate, you made my day!
Have a good week everyone.

Of love, beer and other things 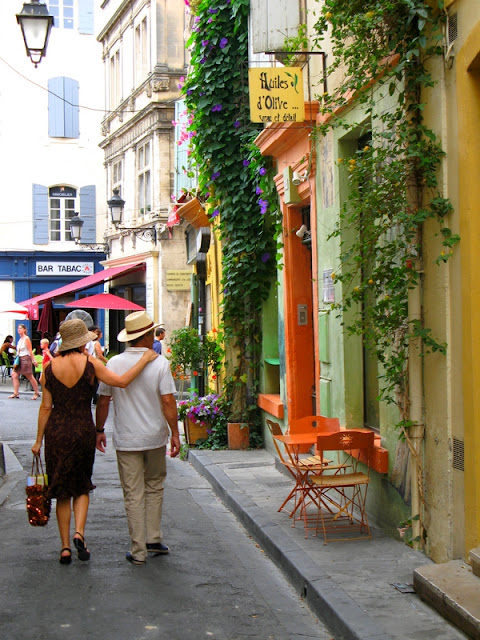 Throughout the European Union today and tomorrow is Heritage Weekend, an exciting event where all national and local museums, castles and other heritage-listed buildings are open to all, free of charge. The brochure listing the monuments you can visit in Avignon alone is so extensive it is dizzying. I'm sure I'll have some photos of that to show next week.

But this week I was strolling through the streets of Arles, another beautiful city 30kms south of Avignon, passing a shop specialising in fine olive oils (can you see the "Huiles d'olive" sign?) when this really classy couple that caught my eye. I thought they fitted in the street perfectly! 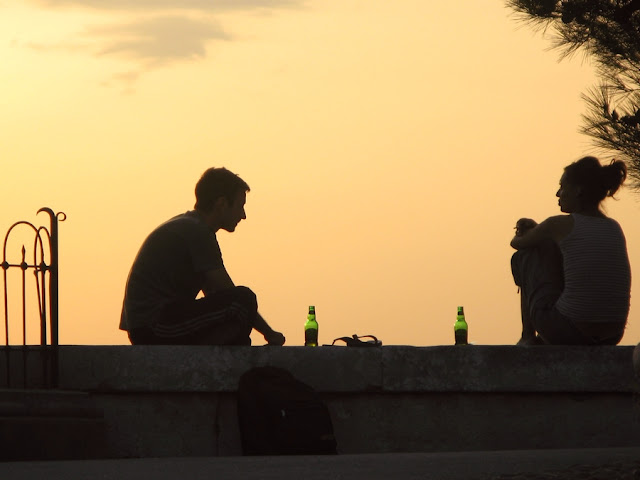 And here's another young couple I caught yesterday evening in Avignon: these two were sitting on an old stone wall in the Jardin des Doms, the public garden overlooking the Popes' Palace. Drinking a beer and chatting, they were watching the sun set over the old town, a sea of pink roofs spreading below them. She was smoking hand-rolled cigarettes (see the very thin roll between her fingers?). I don't think these two are lovers, they are seated too far apart. Students just getting to know each other at the beginning of the year? 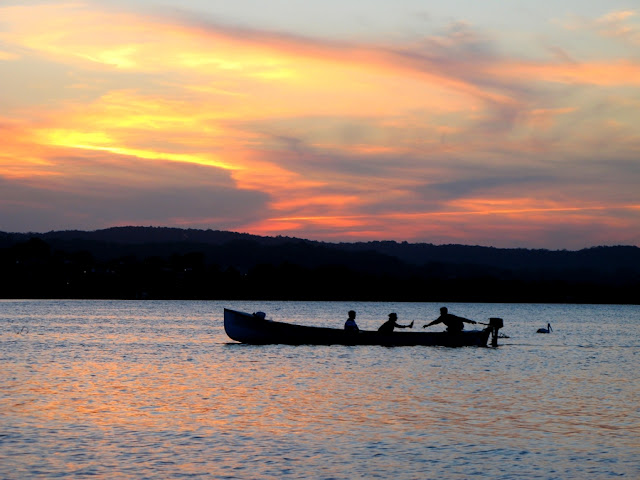 Drinking beer at sunset... suddenly this reminded me of this photo I took in Sydney a couple of months ago and never had a chance to post. I thought this boat at sunset would look nice but just as I pressed the shutter I noticed the people on board started moving - I first thought it would ruin the shot - quite the contrary! When I opened the photo on my computer I realised I had caught a crew member passing on a beer to the captain, which added a wonderful zilch to the shot! 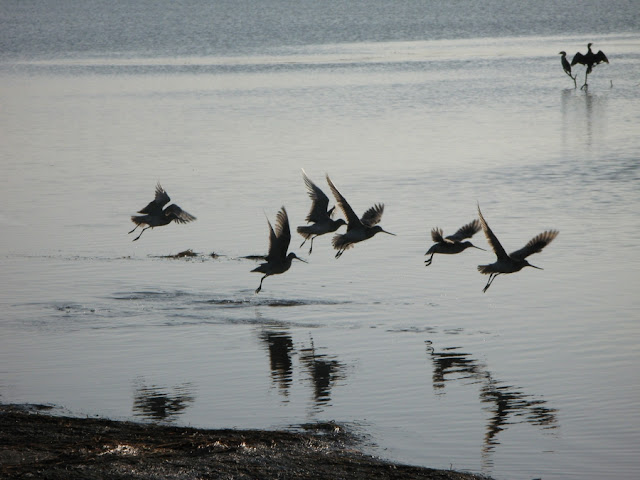 I'll add a flock of birds taken on the same day over lake Tuggerah, north of Sydney. I quite enjoy the idea of occasionally crossing over from France to Australia, bridging the gap from here to there. I have a few left-over shots that I think are worth showing. But for bird and wildlife shots of Provence, you'll have to wait. I don't have a car yet so haven't had a chance to go in the country much. 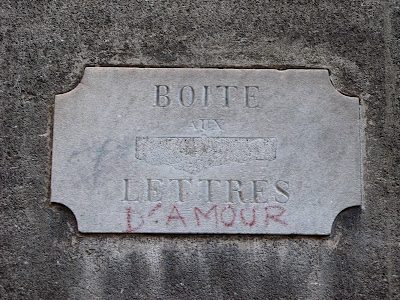 So back to love and the city (not Sex and the city) I'll leave you with this wonderful letter box I found in one of Avignon's back streets. Under the engraved words 'boîte aux lettres' (box for letters, in litteral translation) someone wrote "d'amour" (of love) in red chalk. A letterbox only dedicated to love letters, isn't that delightfully French? That reconciles me with graffiti, which are a real pest in Avignon!
(This last photo is posted as an addendum, I had trouble uploading it yesterday).
Have a good week everyone and may love be all around you.
Publié par Nathalie H.D. à 11:38 40 comments: 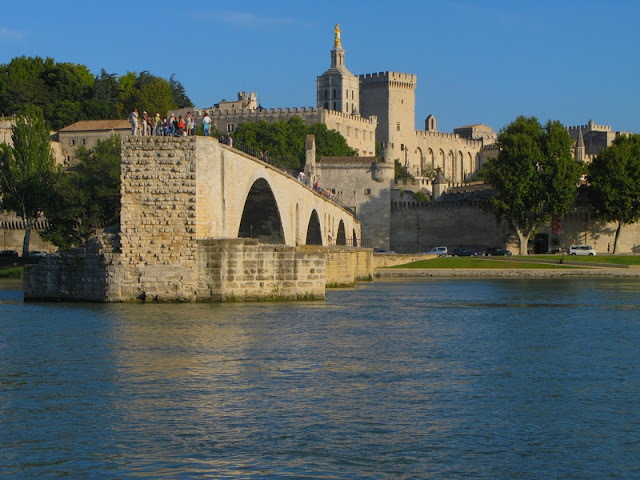 No obvious link between my four photos today, just the result of my errands throughout town this week. I went back along the Rhone, approaching the Pont d'Avignon from the bank opposite the city so you could see the Palais des Papes (the Popes' Palace) and the old city ramparts behind it. The bridge's four arches clearly visible and you can see tourists standing on it.

I took this photo a few days ago on a calm afternoon - couldn't have been today: for the past three days a strong northerly wind, the dreaded mistral, has been blowing our heads off and swirling madly around the streets. The water would have have been very choppy had I taken my photo today! 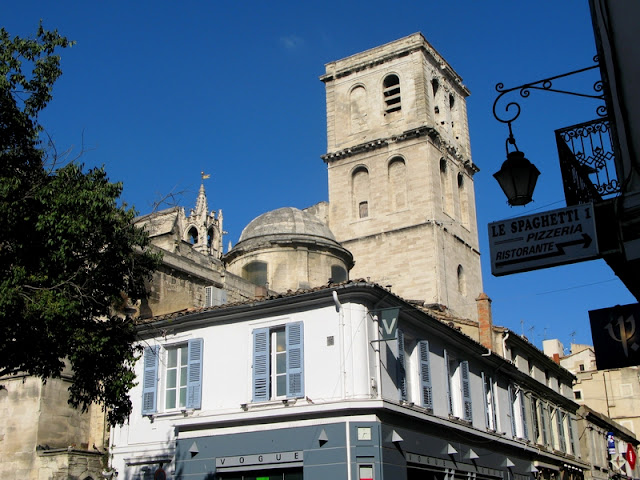 But our reward is this deep blue sky! Quite often when the northern part of France mourns under heavy grey clouds, the mistral clears our southern skies and treats us to a brilliant sunshine. This is rue St Agricol, another upmarket shopping street which feeds into the rue Joseph Vernet I showed you last week. Can you picture yourself living here, blue shutters opening to a skyline of old roman tile roofs and wrought-iron balconies, and waking up to the sound of the bells from the nearby church? 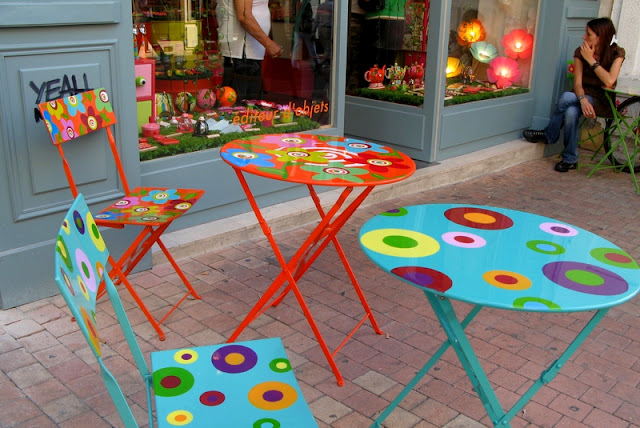 Standing exactly in the same spot as before, I turned around and found myself in front of this very trendy Objects Designer shop where a very traditional (and typically French) design of garden furniture has been revamped in bright colours. What do you think of it? Would have this in your home ? 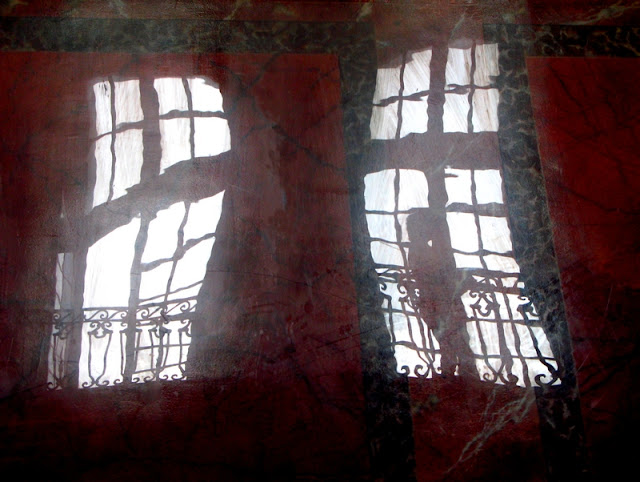 And last but not least, going up the grand staircase of an 18th century mansion where a photographic exhibition was taking place, I used a reflection on the red and black marble wall to catch two majestic windows and their lace balconies on the first floor above me. I'll place this one as my best shot of the week, not so much technically but for its creativity.

And thanks to all of you who sent their best wishes for my daugter's first day at school. She did very well indeed. Best of love to all.
Publié par Nathalie H.D. à 15:05 30 comments: