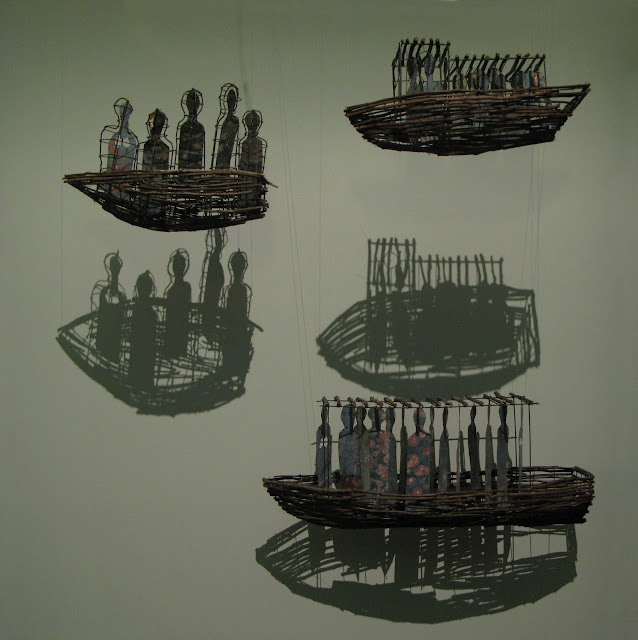 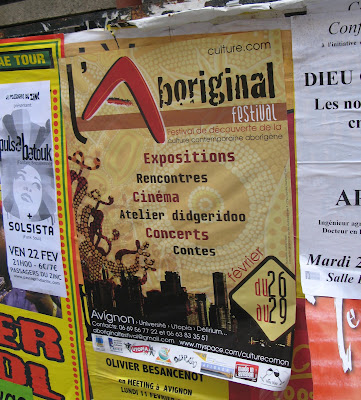 Interesting that there is a cultural festival being held in Avignon celebrating Australian aboriginal cultures. I thought you were the main tie between the two countries ;^)
-Kim
Seattle Daily Photo

I have always been intrigued by the art of the aboriginal artists especially their painting. I never saw boats depicted before today. Those are nice too.

It is easy to misunderstand one another sometimes but I have no problems with it and am happy you are the same.

It's clear that you MUST go there!

(It seems that you are now (again) posting almost every day!! Nice!)

What a wonderful sounding festival and I'm looking forward to your posts!

The "didge" is a fascinating instrument Nathalie. I wish you luck in mastering it!

Yes, please do give us a report about your "circular breathing" progress!

Interesting festival, interesting place to have it - I guess the university is heavily invoilved? (from what I could gather from the program?). Also interesting that France (Paris, I know, but still....) has the most comprehensive permananent exhibition of Aboriginal art at Musee Branly.

It seems somehow to be a natural progression from Rousseau-ism, a bit lioke "From Terra Nullius to Terra Tourism" - love the title of that talk!

Have a good time!

You're right Abraham, only the particular regions of northern Arnhemland and Torres straight islands have kept this tradition of woven artifacts. There were some beautiful pieces at the Maritime Museum in Sydney.

Thank you Nathalie for explaining the meaning of the word "santons". I have seen some like you described in southern France and wondered if Olivier's figurines were called the same thing.

I'm thinking you may have had an important part in presenting this aboriginal art? Am I right?

Sally you've got an interesting point.

One of the speakers tonight mentioned that whereas Aboriginal paintings are exhibited in the Musée du Quai Branly in Paris, which is a museum of primitive art (musée des arts premiers), Australians would never think of doing that. In a sensitive context the words 'primitive art' could be interpreted as derogatory.


In Australia, Aboriginal art belongs in Art galleries, or modern art galleries even.

Moreover the speaker mentioned that Aboriginal paintings cannot qualify as primitive art since they are actually contemporary works : most of them were painted since the seventies.


It's an interesting point and I won't comment on the contents of the museum itself, which I haven't seen, but the fact remains that early Aboriginal paintings were directly inspired by a culture that goes back tens of thousands of years. And in that sense they truly belong in a a museum of INDIGENOUS art which is in my opinion a far better translation than primitive art.

Nathalie, I couldnt agree more, in terms of Indigenous Art being a far more appropriate term than 'primitive' art, a term which I think is offensive, particularly when considered in the context of labels such as 'savages' being used to oppress indigenous peoples for hundreds of years.

Indigenous art being held in museums around the world is a rather controversial topic, at least in Australia. I will be very interested to hear all about the festival.

Thank you for posting this.

Well, home from home for you Nathalie. I'd love to see this exhibition. Good for Avignon in putting it on. When I lived in Cairns I loved seeing the aboriginal art in the galleries. Just wish I could have afforded to buy some!

Annie you're wrong - this festival is the initiative of four young girls who are studying Culture and Communication at the University of Avignon. I only heard about it a couple of weeks ago and I'm only attending as a visitor here.

D., in fact the French word is not Primitive but "Arts Premiers" which means art of the world's First People, so it really means Indigenous Art. The more I think of it, the more I fail to see what's wrong with having Aboriginal art at the Musée du Quai Branly in Paris. On their website's home page, www.quaibranly.fr, the museum's sub-heading is "là où dialoguent les cultures" = Where cultures dialog. Isn't that the most open approach you can take?

I think the Aussie visitor who was shocked got it all wrong. I remember the speaker saying she was curator of the Museum of Ballarat, Victoria. But apart from the Sovereign Hill gold museum and the Ballarat Aviation Museum, there's no such thing as a Ballarat Museum. Nothing that would deal with Aboriginal culture.

I perfectly see your points here on primitive art etc... You should perhaps take it up in a more official way? Write to Chirac who initiated the museum!

Does the festival bring back memories of Sydney? Perhaps a lovely afternoon coffee with a bald boy from Malaysia?

It's interesting that Avignon is hosting the festival. What is your take on the 'Sorry' sung across Oz? I wished I was there to witness it.

I think the controversy comes down to whether the art work was sold to the museum with the free and informed consent of the artist. Or whether, it is in fact the case (like in the not so distant past), that 'art' and other objects were appropriated as a 'souvenir' without the consent of the original owners.

I know that there are museums in the world with 'aboriginal remains' on display, remains which Indigenous Peoples continue to go to court to have returned.

I'm sure that this is not the case at the museum which you mention, after all you are talking about art. However, I think that this puts the controversy in context somewhat.

Beautiful exhibition. It must be real interesting.
Nice photo. The shadows from exhibits gives a nice touch to the photo.

I would love to go to the Branly, and can't see what's wrong with an Indigenous art museum either - it can encompass ancent to contemporary.

One of the best exhibitions I've seen of Aboriginal art was at the Australian Embassy in paris, and it was there are a fore-runner to the opening of the Branly (many of the pieces moved there subsequently I think), and lots of French people went and were really interested (mind you Paris is the capital of museums: I think there must be one for every 3 inhabitants? LOL

Stay tuned for a post tomorrow about the arts in Sydney!

Oh - I can't believe I missed this post and am only catching up with it all today!!
I think those little artworks and the shadows they created on the wall are beautiful (they are shadows right?).
I'm amazed you had a Aboriginal festival. I would love to share some aboriginal rock paintings that are around Ararat but taking photos of them is offensive to the Aborigines.
This month there is a big gathering at Lake Bolac (up the road from Ararat) for the Eel festival which aims to foster understanding amongst whitefellas and blackfellas (and yellowfellas and mochafellas and caramelfellas and even red-heads!).

Well done Nathalie for your photographs. I did want to mention the Aboriginal Festival to you ... and completely forgot. I'm glad you got the info. Hope you had a good time. Thanks very much for the link.
Mathieu.