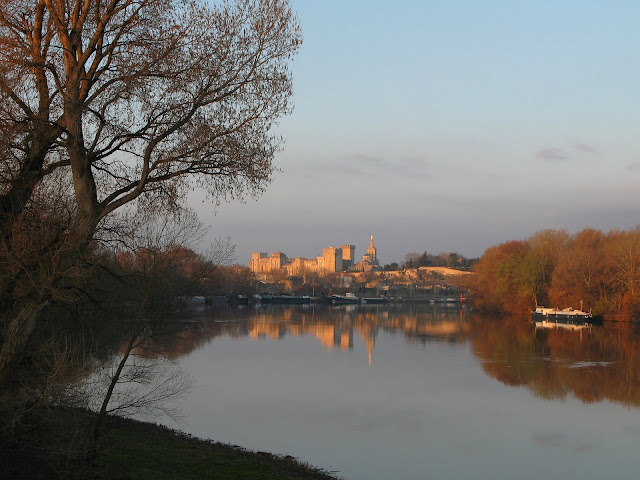 You know how people who visit the tropics always comment on how quickly night falls and day comes? I find the opposite here. I got so used to Sydney sunrises, having to rush to the beach or the harbour to catch those precious morning rays, that I was amazed to see how slowly the sun comes out here. This morning when I got up it was no longer dark but the sun hadn't come out yet. I walked fast from my home to this spot I've wanted to take pictures from for a long time. Despite the 15 mn walk, I got there in time for sunrise. That really surprised me.

We're upstream of Avignon here, along the speedway that hugs the river bank coming from the Avignon North exit of the motorway. If you arrive by car from Paris, this will be your first view of Avignon. How peaceful the river looks... I'll leave you on this good impression for today and won't speak about the dreadful chemical pollution of the Rhone which is poisoning the river's fish and those who eat them. Only click if you want to know; on such a beautiful morning it would be so tempting to just keep ignoring... 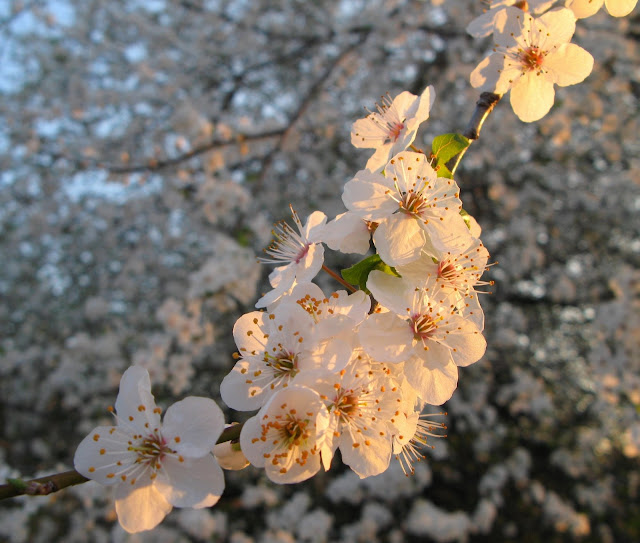 In the wasteland on the opposite side of the road, I found an enormous cherry tree in bloom. How easy it is to believe that nature will always overcome the damage we do to it...

"How easy it is to believe that nature will always overcome the damage we do to it..."

I couldn't tell you about sunrise (I'm not a morning person), but the sunsets are very quick here this time of year.

In my lifetime, Lake Erie was so poisoned with chemical pollution that it caught on fire more than once. Now, however, it is relatively clean again and the fish are doing well. It is a shame that people will screw up the environment we live in to make big profits for stockholders who themselves litter beaches with their trash in retirement communities around the world.

If the corporations whose thinkers destroy mankind had it their way they would harness the power of the sun and sell it to you and me and to those who love to see both sunrises and sunsets.

Fortunately, they don't have that much power yet but you can bet they are working on it.

My apologies for upsetting you with my piece of our local history. This was at a time before the French and Indian Wars in this country and shortly afterwards.

Everyone carried guns here to stay alive. People were being enslaved and scalped and butchered like hogs.

I think you do not know much of anything about American History if you honestly believe settlers should not have carried guns as you so stated.

"It's also a story that couldn't have happened had the settler not been carrying a weapon at that time.

Hence the absolute need for America to accept a ban on the most stupid right they still want to have, the right to be armed. It's caused so many disasters and accidents.How many more before Americans learn?"

Americans will never accept a ban on guns. That is one of our guaranteed freedoms we choose to keep and it is in our constitution.

Again, my apologies. I will be posting another story tomorrow about Indians and me. So you might not want to visit my blog.

I will also try to find your email address and send this response to you that way.

Wonderful photos, especially the first one with the building in the distance, so beautifully lit by the golden sun light.

Hmm. Interesting comments by Abraham so now I have to go back to his blog to find it!

Love the blossoms. Humankind is not kind to nature which often cannot recover from our excesses.

With photographs like yours it's easy to imagine there are no griefs or pollutants. Simply breathtaking.

I replied to Abraham on his blog.


I am shocked by his comment that "Americans will never accept a ban on guns. That is one of our guaranteed freedoms we choose to keep and it is in our constitution." I have the deepest respect for you Abraham but I hope you are wrong. I hope Americans change their constitution. Constitutions are the work of men. They reflect a certain point in time. When circumstances change, so can the laws.

I replied on your blog and I am glad we came to better mutual understanding.

However I'd like to come back to this: "Americans will never accept a ban on guns. That is one of our guaranteed freedoms we choose to keep and it is in our constitution", you wrote. American will NEVER ? I dearly hope you will be proved wrong in the course of your lifetime. I can assure you, men can live without firearms in their homes, and all the better for it. It's done in so many other countries!

France has a strict regulation concerning firearms. Selling of fist weapons or war guns is strictly forbidden. Only rifles are allowed, for those who go hunting or belong to a shooting club. These weapons must be declared. At home they cannot be kept loaded, must be kept separate from the amunitions at all times. Under no circumstances can they be thought of as a means of defending your home, family or possessions. By principle, the defense of citizens is delegated to the police. Self-defence by means of firearms is illegal. Preventive measures such as security doors, bars at windows, surveillance cameras etc are encouraged instead.

The police does no better job or worse than elsewhere. But not having weapons at hand saves us from all the dreadful accidents caused by inexperienced, panicky or grumpy citizens (or their children) shooting around. My main argument is this: If weapons are hard to get for everyone, you have less chances of being attacked by one, and therefore less need to carry one in self-defence. I can tell you it's been proved true in many countries, including mine.

Your main argument is that good citizens need weapons against those who can attack them.

But if you do an honest count, in the U.S. there are far more innocent lives lost to firearms misuse and accidents and massive killings than are saved by honest citizens defending their families. Far more. It's that count that matters. Saving thousands of innocent lives each year is a cause worth changing the Constitution, I think.

A constitution is only a big law. Laws change when the times change, and there's nothing wrong with that. Laws are changed when they no longer serve the purpose for which they were made. Your constitution is less than 220 years old, in the course of humanity that's nothing. It was not there at the beginning of times. It was written when carrying a gun around served a purpose 220 years ago. If the world of today is different to what it was then, what's wrong with adapting your institutions ?

Having less guns around means less chances to have a madman lay his hands on one.
In France and in Europe we never had massive killings at universities or other public places like the U.S. has.


Would you say that those massive killings by people who lose the plot are a regrettable side effect of your freedom to carry a gun, but that your consitutional right is more important than the lives of the innocent killed? Or do you have another view, that I fail to see?

I have the deepest respect for who you are, for the person I have come to know better through your writings. You seem an honest man and a good man. Yet you are defending a constitutional right that to me IN TODAY'S WORLD (we've cleared that aspect of things already) has no reason to stay other than for antiquated historic reasons or by the pressure of a powerful firearm lobby.
I see you as too wise not to rise above both, so I'm still trying to understand.


I hope you don't mind me writing to you in this way. Please see it as an attempt to reach out to another human being whose judgment you value but whose opinion you don't understand.

These are stunning photos. I especially appreciate the cherry tree blossoms. Gorgeous.

Now this post put a particular warmth in my soul - sigh. So so lovely, the photos radiate warmth and serenity.

I can't wait to see the whole tree! Must be marvellous!